15-inch Apple MacBook Pro (2018) review: The most powerful MacBook ever 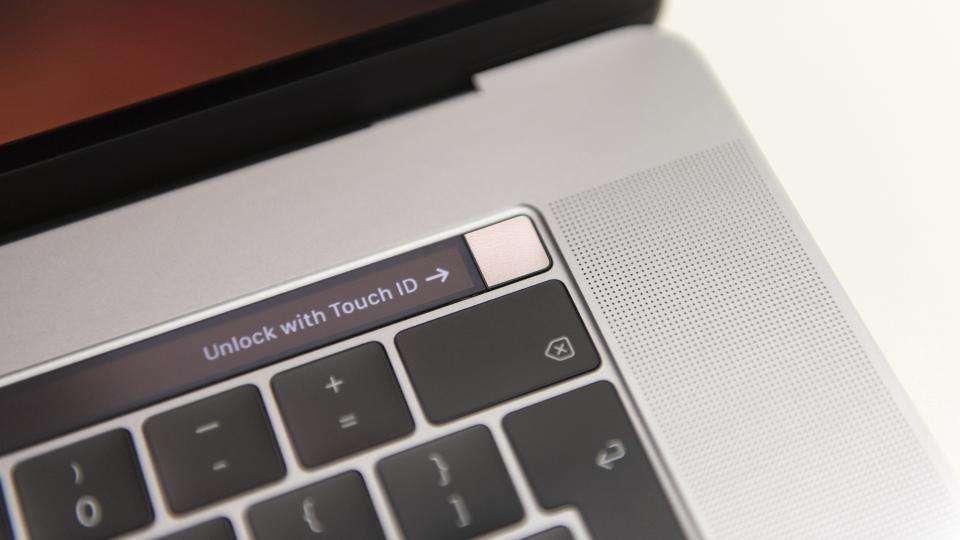 I’ve reviewed many supposedly over-priced laptops over the years since I’ve been a technology reviewer. Some have been MacBooks, some have been workstation Windows machines but none have been quite as expensive as the machine I currently have sat in front of me.

That’s one whole big bundle of cash. But before you grab the reins of outrage and get on your high horse over Apple’s inflated prices bear in mind, for one moment, what this enormous price tag actually gets you.

READ NEXT: Our pick of the best laptops money can buy

This hugely expensive MacBook Pro comes with a six-core 2.9GHz Intel Core i9 CPU, 32GB of DDR4 RAM and a discrete Radeon Pro 560X graphics card with 4GB of GDDR5 RAM. This spec also includes an immense 4TB hard disk, which alone adds around £3,000 to the base price. (SSDs this big don’t come cheap.)

It is, quite simply, the beefiest, most powerful laptop Apple has ever made. It’s the iMac Pro of the MacBook range, if you will, and a laptop that Apple envisages will be used by creative professionals and developers who need a big screen, plenty of power and a machine that can be slung in a backpack and transported easily.

And, while the design and look of the 2018 15-inch MacBook Pro is no different from last year’s, a handful of subtle improvements have been made. It’s the first MacBook Pro available with a six-core Intel Core i9 CPU. The machine’s low-travel butterfly switch keyboard is now quieter and more reliable. And Apple has brought over its innovative True Tone technology from the iPad Pro, which matches the white point of the screen to the environment you’re working in at the time.

The highest specification 15-inch MacBook Pro is clearly outside the purview of regular laptop purchasers. But even the “cheapest” model costs £2,349 and this includes a 2.2GHz quad-core, 8th gen Intel Core i7 processor, 16GB of RAM, a discrete Radeon Pro 555X graphics chip and 256GB of SSD storage.

The table below shows how the various base specifications break down and the cost of upgrades:

In terms of the laptops we’ve tested recently, nothing matches the top-end 15-inch MacBook in terms of raw power and features but the Razer Blade 15 , Surface Book 2 15in and the Dell XPS 15 2-in-1 all offer specifications that are competitive or better than the cheaper MacBooks and are squeezed into similarly slim and lightweight packages.

Despite the improvements, one thing that hasn’t changed in the 2018 MacBook Pro is the physical design of the thing. It’s available in two colours – silver and “Space Grey” – and it’s just as beautifully put together as ever.

Other manufacturers have caught up with Apple in recent years, but there’s still something special about the 15-inch MacBook Pro and its vast expanses of plain, grey matte-aluminium, its minimalist collection of ports and its vast glass-topped touchpad. It’s a lovely, lovely thing and, for a powerful 15in laptop, its 1.83kg weight and 15.5mm thickness are incredibly impressive.

The new keyboard is a big improvement over the previous one, too, but Apple hasn’t changed the mechanics per se. Instead, it has added a silicone rubber membrane between the keys and the aluminium base beneath them, a process that achieves a couple of important effects.

First, the keyboard is less rattly and clacky than before. It has a more damped, deadened sound to it than before so you should feel less self-conscious when you’re rattling out your notes in a quiet meeting room.

Second, it prevents dust and grit from getting under the keys and into the switch mechanisms ( according to the folk over at iFixit, at least ), which is something that a lot of people have reported as a problem with the previous model.

Below the keyboard, the 15-inch MacBook’s touchpad hasn’t changed but it didn’t need to. Its huge surface dwarfs the touchpad on pretty much every other laptop on the market and its clever multi-stage haptic click mechanism means the mouse click is just as responsive, wherever you happen to press it. 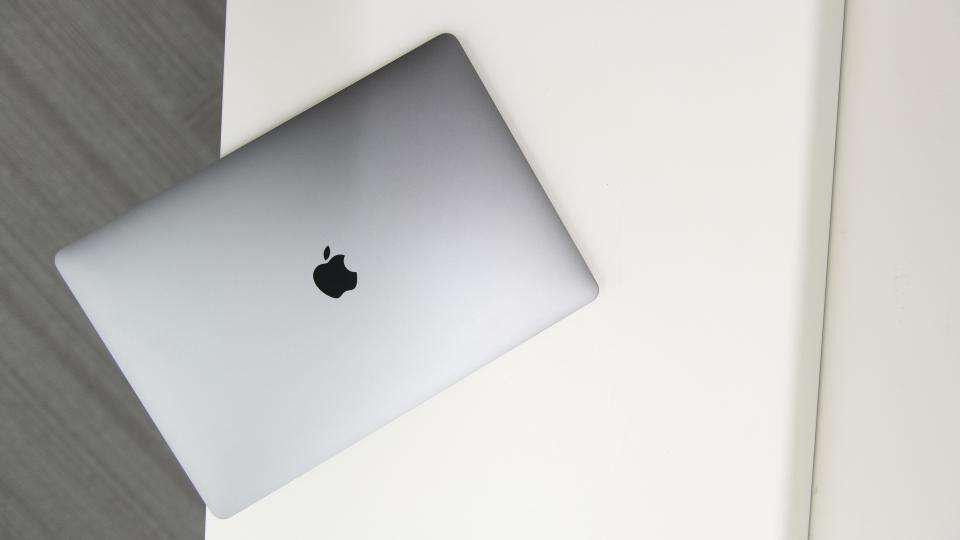 Above the keyboard, the Touch Bar remains in place, as does the dual purpose power/Touch ID button built into its right-hand side, which you can use to unlock the laptop and pay for items via Apple Pay. The latter is a useful inclusion, but I’m yet to be convinced about the Touch Bar; it’s undoubtedly clever but surely it’s time Apple dumped it and went full touchscreen instead.

As for physical connectivity, that’s the same as before too, but it’s still impressive. You get four 40Gbits/sec Thunderbolt 3-enabled ports, two on either side, offering the ability to charge from any port or connect any peripheral you care to think off, from 4K displays to external GPUs. Thanks to the genius of Thunderbolt 3 it’s also possible to daisy chain up to six devices from each port and even connect two MacBooks directly together for fast file transfer.

As ever, the display is brilliant. It’s a Retina-class display with a resolution of 2,880 x 1,800, measures 15.4in from corner to corner and uses IPS technology, so viewing angles are excellent and colours are super-accurate.

MacBook displays have always been calibrated in the factory and this one ships with a huge selection of professional calibrations to choose from so whatever your workflow, you should be able to tweak the colour output to suit – as long as the application you’re working in is colour aware, of course. 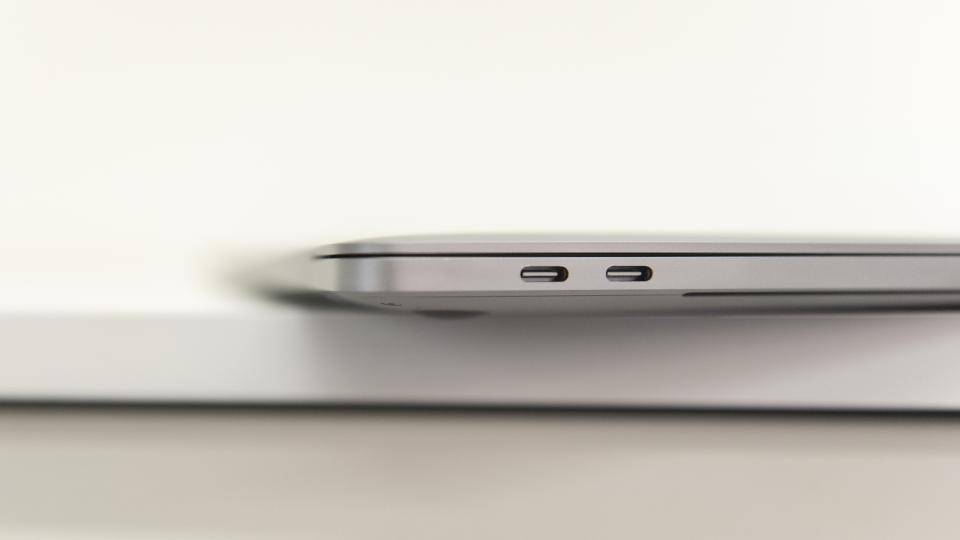 Out of the box, though, as has been the case for some time, the MacBook is set to DCI-P3 and it’s pretty much bang on. According to our measurements, with the default profile selected it covers 99% of the DCI-P3 colour space, reaches a searing 445cd/m2 max brightness and reaches a contrast ratio of a stunning 1,409:1.

For colour-critical work, it’s a magnificent display but it’s also good to see Apple improving things for everyone else, with True Tone adopted for this generation of MacBook Pro laptops on both on the main display and the touchbar. Essentially, this matches the white point of the screen to that of the ambient light so that your brain isn’t constantly adjusting whenever you look away from the display. This works well and is, Apple confirms, merely an eye strain reduction tool. If you’re working on colour-critical graphics, video or photo-editing jobs, you’ll need to disable it.

The only problem is that there is no simple toggle switch for this or keyboard shortcut – you have to delve into the System Preferences dialog box and click on Displays before you can disable it.

The big question, given this is the first MacBook Pro ever to offer a six-core CPU, is how fast does it go? Until a few days before this review was written, that was unsure. The Core i9 MacBook Pro had been reported to be throttling to an unacceptable level by various websites, to the point that it was slower than the cheaper Core i7 below it.

Apple has since issued a fix, though, which seems to have sorted out the problem. In my testing I’ve seen steady clock speeds at or above the base clock of 2.9GHz in every test I’ve run – and raw performance beats pretty much every other laptop we’ve ever tested here at Expert Reviews.

Our overall benchmarks show the Core i9 is clearly the fastest of all the big, beefy laptops we’ve reviewed recently in our media-focused benchmarks. It’s faster than the Razer Blade 15, the Acer Predator Triton, Asus ROG Zephyrus and Dell XPS 2-in-1. None of those laptops, as tested, had Intel’s Core i9-8590HK CPUs on board, however, instead running a variety of Coffee Lake, Kaby Lake and Kaby Lake G chips.

Storage is searingly quick, too, returning impressive 2.6GB/sec and 2.7GB/sec in sequential transfers, beating most other rivals by a significant margin.

Graphics performance is slightly less impressive, however. Although this is clearly not a machine aimed at gamers, it would be nice to see a little more GPU horsepower as there are plenty of creative applications that take advantage of the GPU to help out the CPU.

Still, it is impressive how much power there is in this laptop. Just for some context, I ran the same 4K to 1080p down conversion using Adobe Premiere Pro as I ran on the iMac Pro earlier this year and though it’s a lot slower, the time taken to encode this 12-minute video clip is an impressive 13 minutes. Add an external GPU box like the BlackMagic Designs eGPU, which houses a full blown Radeon Pro 560  and you can cut that time even further.

What’s appealing about a laptop like the 15-inch MacBook Pro, however, is that you can carry all this power around in your bag and work on the go – and despite all that power, battery life is pretty darned good. In our video rundown test, it lasted 8hrs 1min, which compared to most big, powerful laptops I’ve reviewed over the years is amazing.

The Microsoft Surface Book 2 15in we tested lasted longer but it’s not nearly as powerful as this MacBook I have on test and it cheats a bit, too, using twin batteries – one in the base and one in the screen.

The MacBook Pro as I’m reviewing here is, undoubtedly a niche machine but it’s important to look behind the £6,209 price at the top of this review for a moment. Most of that price goes into the enormous 4TB internal SSD, which adds an enormous £2,880 to the price of the base, £2,699 Core i9 machine, which comes with a generous 512GB SSD and the same Radeon Pro 560X graphics chip.

At that price, it looks much more reasonable; not quite as good value as the best 15in Windows 10 laptops, perhaps, but it’s not much more expensive and you get the bonus of exceptional display quality and superb battery life, plus a greatly improved keyboard.

In truth, though, if you’re interested in buying a MacBook Pro, it’s because you’ve been using Macs for years and you’ll be used to paying a small premium. And the fact remains that the 15-inch MacBook Pro, especially in its Core i9 variant, is among the most powerful 15in laptops money can buy.

Prev Previous Huawei Band 6 is now official ...
Next The Most Worthwhile Smart Band Next