How your ad blocker is improving the web experience

How many ads do you think you see in a day?

The answer, according to the IE School of Human Sciences & Technology, is around 10,000 .

That’s 10,000 attempts to sell you something you usually don’t want or need.

You can only process 34 GB of data every day, so ads are an annoying waste of your brain’s resources. They’re an intrusion, a drain on your energy, a distraction from all the things you love, like reading, watching movies, and surfing the web.

Wouldn’t it be better if you could remove them forever?

Without ads, much of the free content you enjoy would disappear. Think about all the popular sites funded through advertising. Take that away and all the movies, TV shows, pictures, ebooks, e-zines, news sites, and lots more would also vanish.

There’s no such thing as a free lunch, as the saying goes. Whether it’s a Spotify subscription or an online newspaper, advertising pays the bills so you can enjoy free content. In some cases (Facebook, for example), ad revenue is the sole source of income.

Then came the ad-blockers. Designed to circumvent web ads through cleverly-written code, all you had to do is install an extension in your browser and you coul surf without distraction. No ads, but all the free content – was this the meal ticket everyone had been waiting for?

Businesses are wising up. Almost a third of the top 10,000 websites employ ad-blocker detection , and can block content unless you disable your ad-blocker or whitelist the site. Now ad-blockers and advertisers are locked in an interminable battle to thwart each other, and users lose out.

Few people enjoying free content would deny the right to advertise, they just want better, less-intrusive ads. At least, that’s what Eyeo , the team behind Adblock Plus and the Acceptable Ads initiative, discovered during their research into a better web. 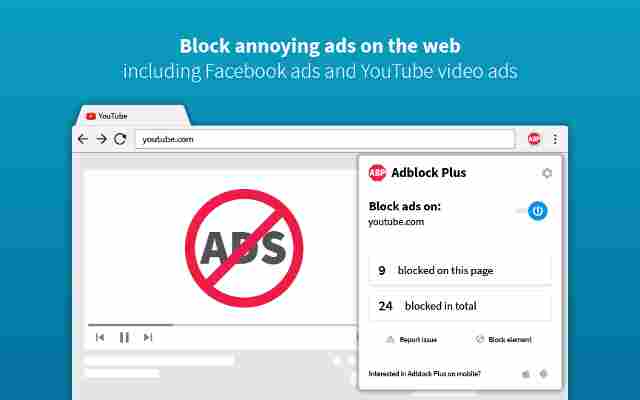 Recognizing the sinister growth of nuisance ads, Eyeo founder Wladimir Palant created Adblock Plus in 2006. It quickly became the most popular Firefox extension ever and is now available on virtually all browsers.

You’d be forgiven for thinking Adblock Plus just another ad-blocker, but Eyeo has a much bigger goal: it wants to make the web a better place for everyone by making advertising fair . Adblock Plus doesn’t block ads, it blocks annoying ads.

That might sound a little subjective, but for Eyeo, it’s about giving everyone who uses the web a fair deal. You can advertise if you don’t intrude on the user experience – that way, everyone wins.

For those who believe in such a thing as “acceptable” advertising (over 75% according to Eyeo’s research ), it means ads that fit the following criteria:

This isn’t an exhaustive list, but these are the primary criteria Adblock Plus uses to assess which ads to display.

So how does Adblock Plus work?

Adblock Plus uses filter lists to block intrusive ads. If you’re a casual browser, you can stick to the default filters enabled when you first install the extension. These will also block sites running malware and other nasties.

Then, when you’re more comfortable, you can create your own filters, or download those created by the community.

The two default filter lists are Acceptable Ads and a known list of intrusive ads in your language. The independent Acceptable Ads committee, which is the only ad standard to take into account the wishes of internet users, decides which ad formats are intrusive.

Advertisers who join the Acceptable Ads initiative are whitelisted (assuming they play by the rules) so you’ll still see them. You can always block them manually afterwards, or filter out Acceptable Ads completely. This does defeat the object of a fair internet, though.

Adblock Plus is an honest response to the dilemma of the content age. It ensures that sites can pay their content creators without drowning you in advertising, while you enjoy all the content you want without having to pay a penny.

Perhaps we can have that free lunch, after all.

Download Adblock Plus today and enjoy all your favourite content, without the distractions. Not only will you see fewer ads, but you can take pride in the fact you’re helping make the internet a better experience for everyone.

Prev Previous How to earn free stuff with Microso...
Next How to best organize Macbook apps Next