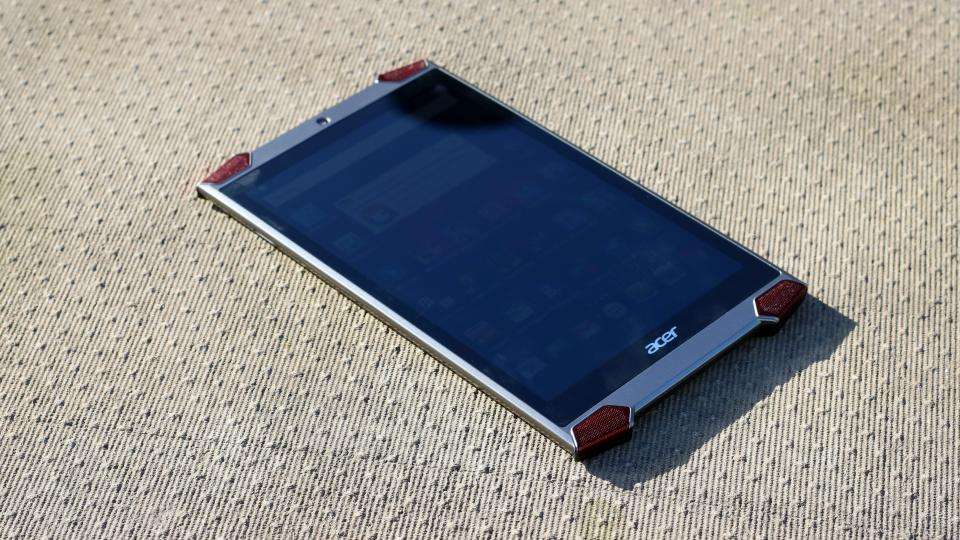 While many tablets can be accused of looking rather similar, the same claim can’t be levelled at the Acer Predator 8. The Android gaming tablet’s distinctive red ‘quad-speakers’ ensure it stands out from the crowd. Whether or not that’s a good thing will be down to personal taste but at least you can’t accuse it of being boring.

Like Acer’s Predator range of gaming PCs and laptops, the Predator 8 has a ‘hyper-aggressive’ design that plays to the stereotypical (but not necessarily the genuine) tastes of gamers. There’s flashes of red contrasting with the predominantly silver and black case and the back has a faux-brushed metal finish. It feels solid and well-constructed in your hands. At 8.7mm thick and 350g it’s reasonably thin and light.

When held in landscape, there are soft grip rubberised pads on either end, designed to give you a firmer hold of the tablet during intense gaming sessions. In reality, these are compromised by the shape of the speakers. These jut out at awkward angles and have sharp, uncomfortable corners meaning there’s a good chance they dig into your hands.

I’m assuming Acer’s plan was for you to hold the tablet with your palms between each vertical pair of speakers, but in practice doing so puts your thumbs above where most games would place onscreen controls such as virtual D-Pads. This means you’re far more likely to hold the tablet lower down, wherein the sharp corners become a problem and you’re less able to actually use the soft grip pads.

This could well depend on the size of your hands and preferred gripping style, but either way there’s really no reason that Acer had to make the corners quite so sharp. It would have been better if the corners were rounded off.

Acer calls those distinctive, red speakers ‘Predator Quadio’ as there are four of them. These detect the orientation of the tablet, meaning you get correct left and right stereo channels regardless of whether the tablet is held in portrait or landscape, which is great. This also affects the volume rocker controls so they match the orientation so things don’t get confusing.

The front-facing speakers are some of the loudest I’ve heard from a tablet and there is genuine, pleasing stereo separation. There’s virtual surround from Dolby but the effect isn’t particularly prominent. You can hear a slight pause in the audio when you change the tablet’s orientation as it adapts the speaker configuration to match. The pause is no longer than it takes for Android’s screen rotation animation to complete so it doesn’t feel too jarring.

There’s very little in the way of any bass presence when using the Standard sound profile, but the mids and trebles are surprisingly crisp. It meant the tablet was great for watching televisions shows and films in terms of being able to hear dialogue without the need for headphones. Using the Acer MediaMaster app, you can change the audio to Rich or Focussed. Set to the latter there’s a considerably warmer sound, which was my preferred mode.

Aside from the sharpness of the edge of the speakers, I had another complaint when it came to their design. The speaker grilles have tiny perforations and these have a habit of collecting dust that becomes trapped and difficult to clean.

The Predator 8’s 8in display is particularly lovely. It has a 1,920x1,200 display that’s particularly vibrant and bright. It has 100% coverage of the sRGB colour gamut, making for wonderfully accurate colours and its peak brightness of 411.1cd/m2 makes it consummately easy to use even in bright outdoor lighting.

Black levels of 0.43cd/m2 and a contrast ratio of 949:1 aren’t great and under close scrutiny the blacks aren’t as deep as I would like but they be partially excused for such excellent brightness and colour vibrancy. Colours really do pop off the screen. While it’s not a super high-resolution panel for its size, text and images still look decently crisp and sharp. There’s no air gap between the glass and the touch panel and the backlight was nice and even with good viewing angles to boot.

If you find the colours aren’t to your taste there are a number of different profiles available in the MediaMaster app where you can adjust saturation and colour temperature.