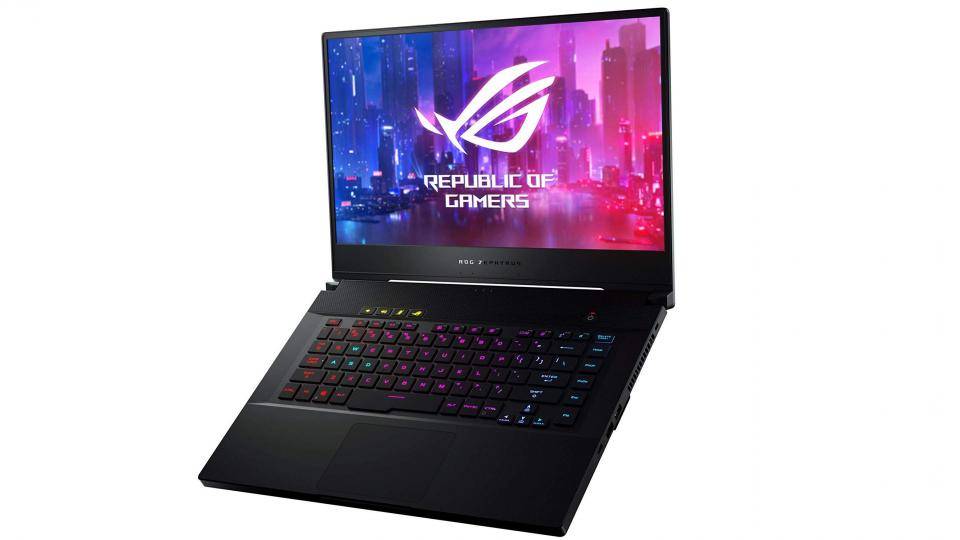 When Nvidia launched mobile versions of its RTX graphics at CES in January, we knew what to expect: slimmer gaming machines with even better performance. Add the latest mobile Intel chips into the mix and you have all the ingredients required for a stunning gaming laptop.

The challenge for manufacturers is to lift their offerings from the rest, and in particular to unseat Razer as the gaming laptop maker of choice. Asus has sometimes used gimmicks such as shuffling the keyboard to the front, but it sensibly keeps things much simpler with the Zephyrus S; the only frippery is the RGB-lit vent on the bottom, which opens up when you lift up the screen.

What’s more, this vent has a legitimate use of cooling the hardcore components within. The Core i7-9750H is a sensational CPU, and with 32GB of DDR4 memory and a fast 1TB PCIe SSD in place (delivering 2,237MB/sec sequential reads and 1,752MB/sec writes), this is a laptop that chews through demanding tasks with ease, achieving an overall score of 194 in our benchmarks.

In general use, it’s also lovely and quiet, but once you start taking advantage of the RTX 2070 graphics chip fan noise ramps up. The results are worth it. Metro: Last Light hit 159fps at 1080p (High quality), and even Hitman 2 ran at 70fps once I reduced “supersampling” to 1x from our test default of 2x and switched to Direct3D 11. It is very nearly a match for the Max-Q RTX 2080 inside the Razer Blade 15. The RTX 2070 will accelerate professional software packages too, although this particular laptop isn’t part of Nvidia’s RTX Studio scheme.

That’s a shame because the 15.6in panel is “Pantone Validated” for accuracy and performed well in most of our tests. Highlights include a 1.14 Delta E average, which is what I’d expect from a professional-quality monitor, while it covered 88.9% of the sRGB gamut. Its brightness uniformity was excellent too, with the only disappointment being a measured 826:1 contrast ratio.

Annoyingly, this won’t be the panel you buy: at this early stage, Asus could only supply a 144Hz panel with our test system. Systems available to buy only include a 240Hz panel, which makes sense when Asus is targeting the Razer Blade 15.

READ NEXT: Our best lightweight laptops 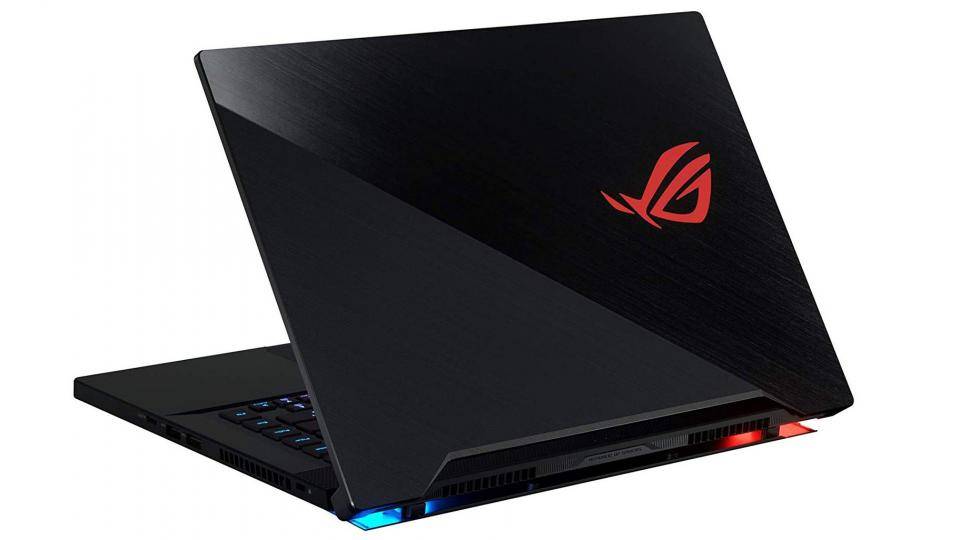 The GX502 certainly beats the Blade for audio quality: it packs a hefty bass and plenty of volume and, unusually for a laptop, I was happy listening to songs on it. Don’t expect £100 speaker levels of detail, but it comes surprisingly close. This quality adds an extra dimension to films, too, even if Asus’ promise of 7.1 positional audio is optimistic.

Asus has done an excellent job with the keyboard. While only gamers will appreciate the N-key rollover, everyone will enjoy the snappy feel of the keys. The spacebar is particularly easy to hit, and even though the Enter key is single-height I found it every time when touch typing. Asus clearly marks all the function keys, too, with an extra nice touch being the row of four dedicated buttons for up/down volume, mute and launching Armoury Crate.

This gives you greater control over performance settings, for instance, along with system updates and Aura Sync: Aura controls the colour scheme for the keys, and with each one having its own RGB customisation (if you want) there’s plenty of choice.

While the Zephyrus S isn’t as compact as the Razer Blade, it’s slim at 18.9mm and its 2.07kg weight isn’t at all onerous considering what’s inside. The keyboard surround has a matte black rubberised finish that’s a pleasure to both look at and rest your hands on, but I’m less enamoured with the brushed metal lid due to its glossier finish; a matte effect would have worked wonders here. If you’re looking for a classy laptop, the Razer Blade 15 wins hands down. Note the lack of a webcam, too. 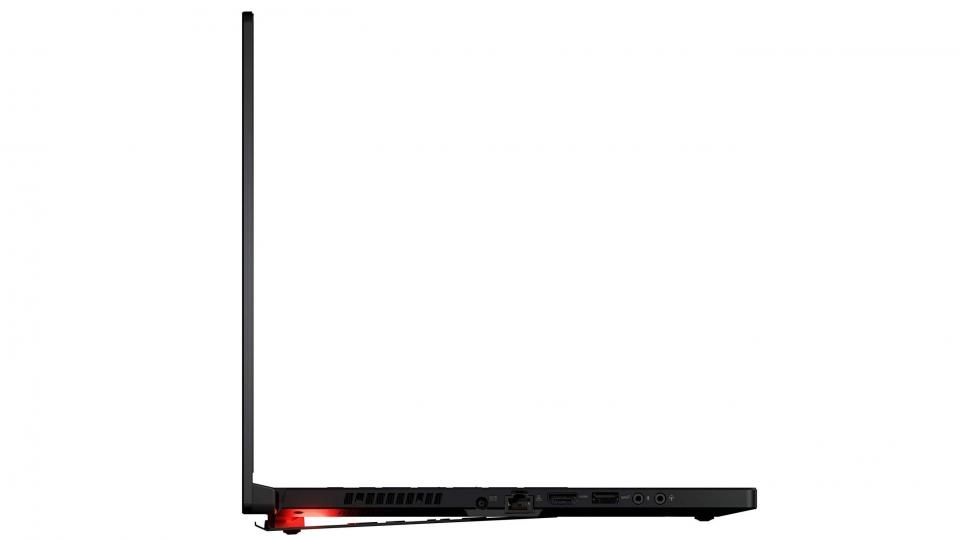 Asus offers more connections, though, with a Gigabit RJ-45 jack, HDMI 2.0b output and Gen 2 USB-A 3.2 port on the left (along with a 3.5mm audio jack and dedicated mic in). Two USB-A Gen 1 3.2 ports sit on the right-hand side along with a Gen 2 USB-C 3.2 port: this supports DisplayPort 1.4 and power delivery of up to 65W. For the most part, though, you’ll need the 630g power brick, which plugs into an input on the left: 3hrs 54mins in our video rundown test is better than the Razer Blade 15, but if you start pushing this laptop in games its life will plummet.

So has Asus done enough to usurp Razer? In many ways, yes. It’s bigger than the Blade, but not by so much that it makes a huge difference day to day. Its performance is equally stellar and it’s cheaper, too. The only downside is that it isn’t as sleek, and I haven’t been able to test the 240Hz screen so can’t comment on its specific performance. 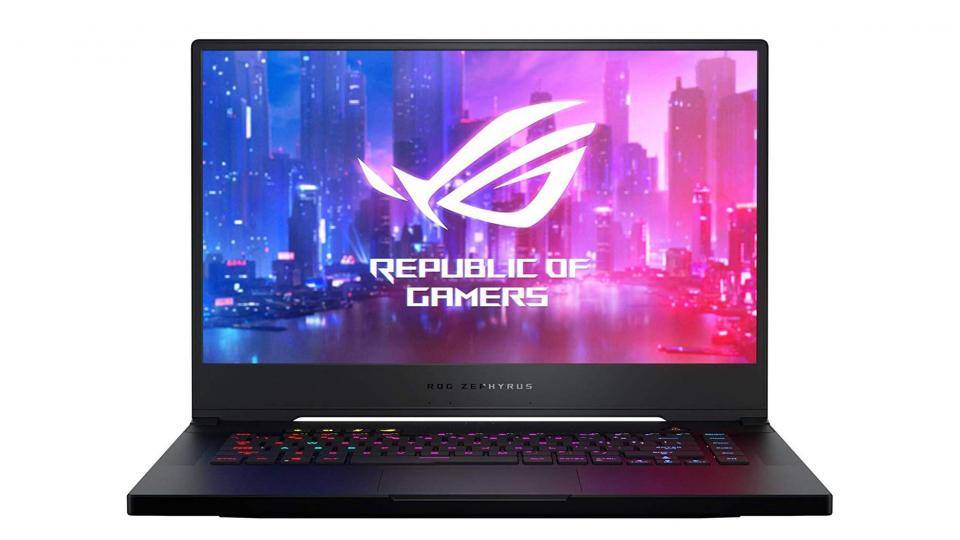